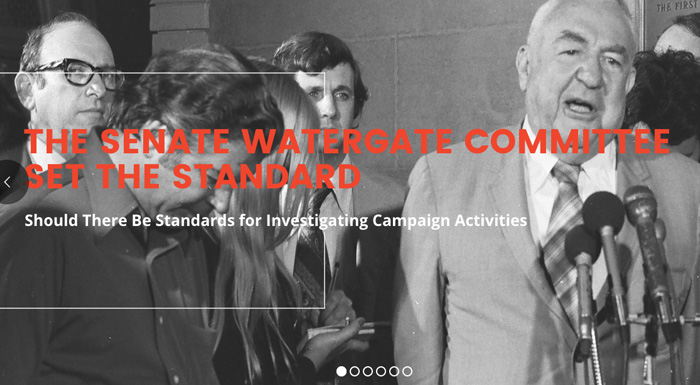 The purpose of WategateCommittee.org is to provide historical reference for the work of the Senate Select Committee on Presidential Campaign Activities (more commonly known as the Senate Watergate Committee) and to provide a contemporary understanding of the work, product, and culture of that investigation.

Watergate is in the air. Hardly a day passes when news outlets aren’t comparing the current political chaos and overall climate to those that saturated the months of the Watergate scandal. However, while many of those listening to the news now also lived through the Watergate years, there is a clear gap between general understanding of the Nixon scandal and the impact it had on past and present politics.

The saga of events that many understand simply as “Watergate” are comprised primarily of three major investigations kicked off by the burglary of the 1972 Democratic Campaign headquarters in the Watergate Hotel. The first investigation, the one that started as a routine investigation but became much more significant, encompasses the grand jury inquiry into the break-in. This was focused on criminal wrong-doing associated with the break-in and then expanded to other campaign activities and the cover-up of those events.

The two other investigations, the Senate Watergate Committee and the U.S. House Impeachment Inquiry, brought forth facts associated with wrong-doing and irregularities in the conduct of the 1972 Presidential campaign, which received authorization for the impeachment inquiry of President Richard Nixon. The work of the inquiries and their findings unearthed enormous abuses of power and culminated in Nixon’s resignation on August 8, 1974.

In the aftermath of the events of Watergate, the suffix “-gate” was immediately popularized in news culture to signify an event of wide-reaching scandal. Of the myriad examples, many referred to the chaos that erupted in Hilary Clinton’s use of a private email server in 2016 as “Emailgate.”

The ongoing investigation of alleged Russian influence in the 2016 U.S. presidential campaign and election proves that internal and external interference in such high echelons of the political sphere are highly salient threats. Such allegations of wrongdoing will continue to be the purview of lengthy and convoluted investigations, and, thus, there will continue to be the need far into the future for open disclosure of allegations, the separation of fact from fiction, and the strenuous prosecution of those who are convicted of crimes.

What made the Senate Watergate Committee investigation unique was its size, commitment to the truth, and tenacity in carrying out its investigations despite continual pressures working against it. The charge for the Senate Select Committee on Presidential Campaign Activities was to investigate campaign wrong-doing.  This meant a separate Committee for just this purpose was established and eventually had over 100 staff members and worked for a year and half almost 24/7.  For this reason, and because of the unprecedented consequences of the investigation in contributing to the unseating of a U.S. president, the Committee’s role of informing the public to the point of confidence in the facts, became “the” benchmark for unmasking political offense.

Many of the staff members from the Senate Watergate Committee are in contact with each other and the events of Watergate live strongly in our memories, undiminished by time. We constructed WatergateCommittee.org as an informational and educational resource composed of a great deal of personal information, an archive of original pictures of the staff and senators, and expert curation to allow guidance and comparisons with future events for scholars, students, news organizations, and government staff and officials.

Gordon Freedman served on the Senate Watergate Committee staff in 1973 and 1974. Afterwards, he was a part of the Washington Press Corp and ABC News before moving to California to work in the film industry and education technology.